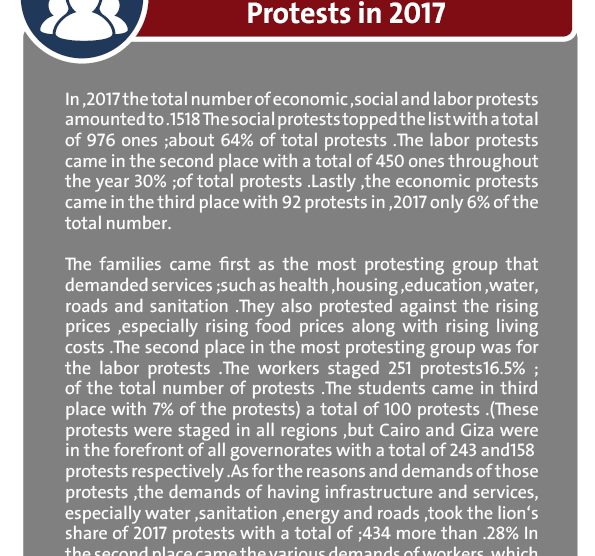 On the occasion of Labor Day, Social Justice Platform (SJP), in association with the Egyptian Center for Economic and Social Rights (ECESR), issues a fact sheet on the economic, social and labor protests in 2017. This fact sheet is on the labor, economic and social protests that were staged in Egypt throughout the previous year.

Without any endeavors to come to generalized conclusion, the fact sheet contains information on the different protests along with their types, reasons, motives and their organizers in an objective manner. The end of this fact sheet is to allow the protesters- through their protests- to draw a general image expressing them. Although it may not be complete, it would ultimately be more credible than any other image could be imposed on their behalf according to prior assumptions.

The families came first as the most protesting group that demanded services; such as health, housing, education, water, roads and sanitation. They also protested against the rising prices, especially rising food prices along with rising living costs. The second place in the most protesting group was for the labor protests. The workers staged 251 protests; 16.5% of the total number of protests. The students came in third place with 7% of the protests (a total of 100 protests). These protests were staged in all governorates, but Cairo and Giza were in the forefront of all governorates totaling 243 and 158 protests respectively. As for the reasons and demands of those protests, the demands of having infrastructure and services, especially water, sanitation, energy and roads, took the lion’s share of 2017 protests totaling 434; more than 28%. In the second place came the various demands of workers, which were related to financial compensation, wages, incentives, leave and the right to association; representing about a quarter of the protests in 2017, almost 24% (365 protests).

By this fact sheet, we endeavor to present a descriptive reading for the data that had been monitored and documented; aiming at introducing the patterns uncovered by the data of SJP team. In other words, this paper aims primarily at drawing a topographical picture of the economic, social and labor protests, in both temporal and spatial dimensions, and their characteristics are the types of protests, the groups of protesters, the reasons for the protest and the means.

YOU CAN FIND IT HERE Annual Protests of 2017