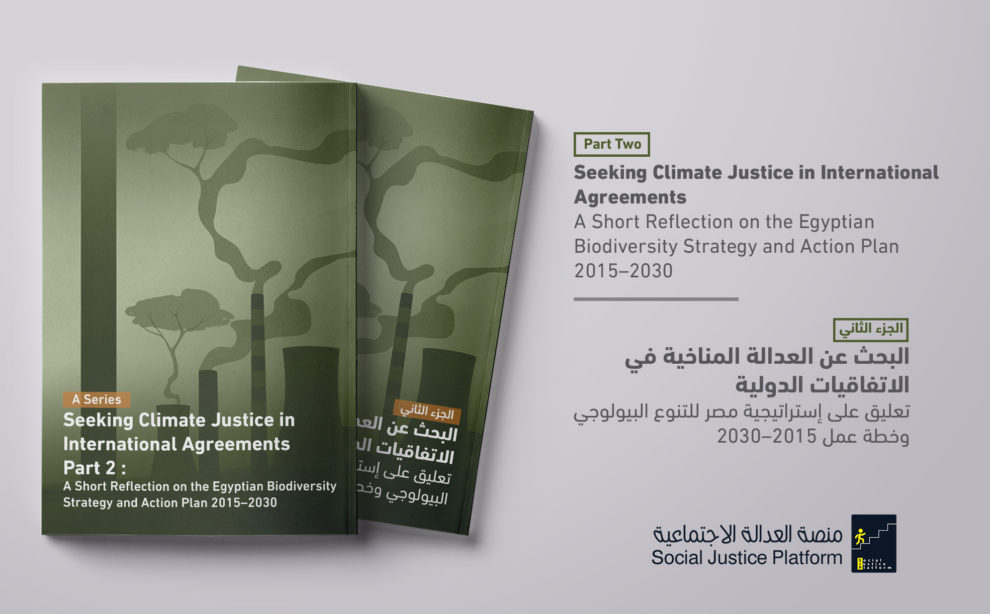 Part Two: A Short Reflection on the Egyptian Biodiversity Strategy and Action Plan 2015–2030

The Conference of Parties (COP) on the Convention on Biological Diversity met in Egypt from the 17th to the 29th of November 2018 to discuss the global legal framework for biodiversity action. Held in Sharm El Sheikh, the 14th meeting aimed to inaugurate the process of adopting a post-2020 biodiversity framework, set to be officially adopted during the 15th COP meeting in Beijing in 2020. Furthermore, the agenda included discussing the strategic directions for the 2050 Vision for Biodiversity, review of the effectiveness of CBD processes, and other issues regarding reporting, assessment, capacity building, and financial mechanisms. Parties also had to discuss the current progress in the implementation of the Strategic Plan for Biodiversity 2011–2020.

The main goals of the Strategic Plan 2011–2020, referred to as the Aichi Biodiversity Targets, are to: 1. address the underlying causes of biodiversity loss by mainstreaming biodiversity across government and society; 2. reduce the direct pressures on biodiversity and promote sustainable use; 3. improve the status of biodiversity by safeguarding ecosystems, species, and genetic diversity; 4. enhance the benefits of biodiversity and ecosystem services for everyone; and 5. enhance implementation through participatory planning, knowledge management, and capacity building. The primary idea is that by 2020 all these goals should be accomplished through achieving specific targets respective to each goal.

In Egypt, as in many other countries, biodiversity values are not well integrated into national development plans. Movement toward sustainable production is still hampered by economic growth logics, and the government’s misdirected efforts to subsidize large producers in spite of their net negative ecological impact. Ecosystems that provide services essential to human life are being increasingly privatized, and anthropogenic pressures on these ecosystems have not been adequately minimized. Given that the Aichi Targets haven’t been adequately realized, activists have called for a more stringent framework for the Beijing meeting in 2020.

This conference is one link in the long chain of drafting targets, failing to realize them, pointing out the inadequacy of global biodiversity efforts in the following COP, and then redrafting new targets, a cycle that should now be put to question. Nele Marien, an environmental activist and coordinator of Friends of the Earth International’s Forests and Biodiversity program, who attended the COP 14 in Sharm El Sheikh, argued that corporate pressure was steadfast throughout the negotiations, which made it extremely difficult to have faith in the COP process. Marien contends that the solution to the biodiversity crisis cannot be found by working with the same industries that destroy biodiversity while expanding unchecked. “There is no way for extractivism to operate in harmony with biodiversity, this is a contradiction in terms,” she puts it.

In ways similar to the proceedings of the UNFCCC, the Convention on Biological Diversity is praised by myriads of groups that value the process of drafting international agreements and getting all members to sign them, without critically interrogating the effectiveness of such processes. The outcomes of COP 14 still do not move toward real solutions to the biodiversity crisis, which must start with stringent regulation of and restrictions on corporations. The endless drafting and redrafting of plans for 2020, 2030, 2050, forces us to question whether the involved stakeholders are actually committed to mitigating the situation, or whether they are adopting a business-as-usual approach that indefinitely postpones action. It seems that the latter is the case, despite the ongoing efforts of some groups committed to realizing climate and environmental justice in biodiversity work.

Globally, biodiversity is threatened by factors such as excessive urbanization and destruction of natural habitats, pollution of air, water, and soil, climate change, continuing deforestation, overuse of green spaces and wild areas, invasive species, and overexploitation of species (e.g. overfishing). When it comes to Egypt, there is a major biodiversity threat to coastal reefs and marine life in the Red Sea. The crisis is exacerbated by water pollution, continuous oil spillage from offshore rigs, problematic diving practices, and poor waste management along the Red Sea. Massive urbanization on agricultural land, the expansion of industrialization, and waste production by key sectors engender more biodiversity loss. The Egyptian government is aware of the problem, and Egypt currently has 30 protected areas that are managed by the Ministry of Environment. But this does not mean that the structural changes needed for the protection of biodiversity are observed or even seriously considered.

The biodiversity crisis, like global warming, is an issue that cannot be conceptualized or addressed separately from global and local systems of environmental governance. Biodiversity loss is the logical consequence of climate change, which is in turn caused by anthropogenic destruction of the environment. For that reason, all strategies to save biodiversity need to propose solutions that do not isolate it from the economic and political structures sustaining environmental injustice. Biodiversity conservation is not a neutral process. Environmental and climate justice principles need to be taken into account when describing the problem and proposing solutions. Corporate’s stronghold of the COP on biodiversity will continue to hamper this ideal.