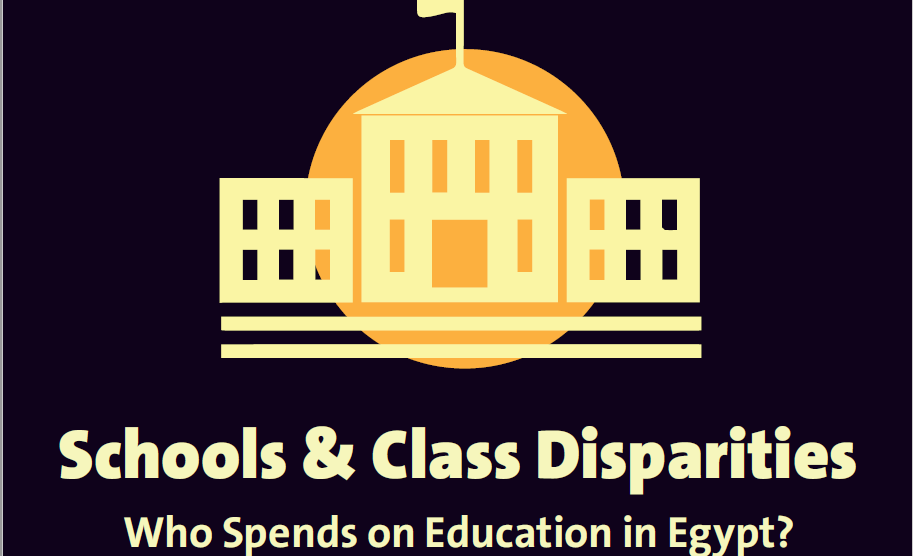 Social Justice Platform (SJP) issues a report titled “Schools and Class Disparities: Who Spends on Education in Egypt?” It discusses the burden of spending on education; wondering which family groups, with their different economic, social and cultural background, can pay for the education services? Moreover, it poses questions about the actual role of the government regarding the education services under the “liberalization of education sector” polices, and if this role includes the spending on the simplest pillars of educational process, such as the provision of land and  school buildings, particularly under the high prices of construction. How has the role of the country, which is in charge of building and managing public schools across the republic, been developed under the liberalization of education policies? And if the government is not playing these roles, then who spends on education?

This report comes in light of the current discussion on the steps to develop education, which depends on the plan of sustainable development known as the vision 2030. In the context of this vision, the Ministry of Education introduced a new system that is fundamentally different from the current system, which has been characterized by its failure on the level of quality due to the curriculum as well as the assessment and teaching methods. In his explanation of the new system, the Minister of Education relied on the constitutional articles on pre-university education. He explained that the aim of the new system is to “rebuild the Egyptian man and create generations capable of competition that can increase the Egyptian state productivity, eradicate the budget deficit, achieve surplus, and begin to move the economy to the knowledge economy.”

None of the Egyptians objects to the priority of developing education, but they can oppose developing a plan that ignores the basic reasons led to the failure of the educational system, including high student density, teachers’ low wages, low numbers of teachers for students, and low curriculum standards. When it comes to global quality and standards, we must be aware of these pillars and work to improve them in a comprehensive and coherent manner. The development of the teaching methods and tools is certainly essential, but to develop them abstractly, without improving the other necessary factors in the educational process, will necessarily end in failure.

The report raises the most important question for the development of education. It is the question about the process of spending on the sector. When the Minister of Education, while explaining the system, relied on the constitutional articles, he ignored and marginalized the state’s obligations to allocate 4% of GDP to spend on pre-university education and to raise this rate to reach international standards, taking into account the financial and moral conditions of teachers.

Yet, the state has not directly complied with the constitutional benefits, but has circumvented them by merging items from other sectors into spending ratios. Teachers’ wages have not been raised to guarantee them a dignified life and a high moral standing while raising the salaries of ministers, governors, MPs and other officials according to an act passed by the Parliament.

The report also deals with the private education and its two types, language and international schools, which is not affected by the new system. On the contrary, it will retain its quality for its proficiency of foreign languages in the early stages of pre-primary and primary education. However, which groups have the financial and cultural capital to support their children so as to enroll them in educational systems that ensure their cultural, economic and social levels? After the abolition of languages education in public schools (formerly experimental schools), which was a way to invest a certain social class in educating their children, ensuring their steadfastness in their status and retaining social and cultural advantages, there is great concern about the loss of those features that have long been essential to that group. It is even worse if the state tries a new educational system on other groups that have no choice but to enroll their children in government education because of their economic and social backgrounds, who are marginalized or unable to afford the public languages schools or the private and international ones; and then they turned into an experimental plot for a model with no clear foundations to be built upon, and does not address the intractable problems in the educational process. On the other hand, richer and higher classes can avoid such a move, given the options open to them, which provide them with multiple choices in the education market, far from all kinds of experiences.

Finally, the contraction of low-budget government education of poor service in return for the private education is a fundamental dilemma and a motive to reproduce and expand class inequality. Therefore, we have to look at the long-term outcomes of the educational process; namely, creating the workforce and career opportunities in the market, in parallel with the creation of the citizen and the individual in the Egyptian society. The Ministry of Education should consider these far-reaching results to be key to its development efforts, as the data analyzed in the report indicates a decline in the competitive potential of graduates of public education to graduates of private education. This decline is exacerbated by the inherited capital, which belongs to the cultural and professional dimensions of parents, and which benefits only those culturally and physically capable.

Achieving justice in education is the first step towards achieving social justice among all people. Education must be a force for equality and opportunity among citizens. This will only take place when education becomes a priority on the political agenda of governments, and this priority is reflected in the state’s financial and economic plans. This is achieved by monitoring changes in the education sector along the different social and economic periods, analyzing the role of the state and the private sector in accomplishing these transformations, and evaluating the previous strategies and projects that eventually led to the collapse of the Egyptian educational system. Education is a mechanism for inequality and widening gaps between citizens.

YOU CAN FIND IT HERE: Schools & Class Disparities: Who Spends on Education in Egypt?