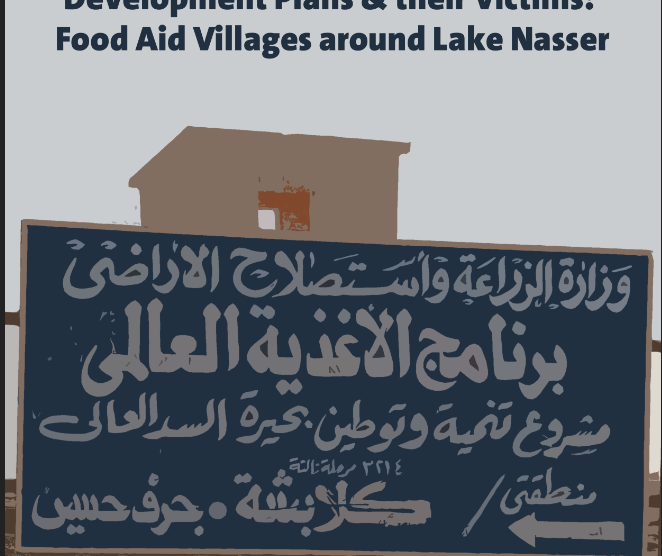 “Social Justice Platform (SJP)” releases a research-based report on the Food Aid Villages alongside Nasser Lake; a vivid picture of the victims of development projects that are based on narrow visions and afterwards lead to a full-blown catastrophe, as the state ignored the promises made to the people as well as the agreements it signed with the families, the United Nations and the project financiers. It, ultimately, ended with a group of families in the middle of the desert without the most basic elements of life; having sold all their property in their original towns to reclaim the desert as the government aspired to, hoping for a new just life. However, what occurred is the opposite.

Such a matter necessitates reconsidering the agricultural reclamation projects as a means of development, and raises many questions not only with regard to the state’s development vision, but also we must determine what is basically meant by “development”.

The Food Aid Project: is a development project that was established following the agreement between Egypt, represented by the Ministry of Agriculture, and the World Food Program affiliated to FAO- the Food and Agriculture Organization of the United Nations. It started in 1990 and continued until 2011. The project extends south to Shalatin, north of the governorates of North Sinai, Alamein, Marsa Matruh, Kafr El Sheikh and south of Lake Nasser and Aswan. The project aims to increase agricultural land, enhance food security in Egypt, benefit from the resources of Lake Nasser, settle in new desert areas, and replace the families from crowded areas – Nile Valley and Delta – to new desert areas.

This report highlights the situation of the people of Food Aid villages, after they were ignored by the media and abandoned by the government that prosecuted some of them.  Its aim is to contribute to the struggle of these people so as to obtain their economic and social rights as well as their basic rights to own land in accordance with the provisions of the Agreement.

Noteworthy, a lawsuit was lodged before the administrative court in April 2018 to challenge Lake Nasser’s decision to strip the residents of their land, because it is contrary to the provisions of the agreements that the project is based on.

We hope that this report, issued by SJP on its website, will be a useful resource for researchers, journalists and readers interested in social and economic rights and those who are interested in development projects – whether in land reclamation or in general – and their implications. Also, we hope that this report will be fair to the people of Food Aid villages, and a joint contribution between the ECESR’s researchers and the families that will lead to the continuation of their struggle, and to be for the interest of social struggle in general.

YOU CAN FIND IT HERE Food Aid Project