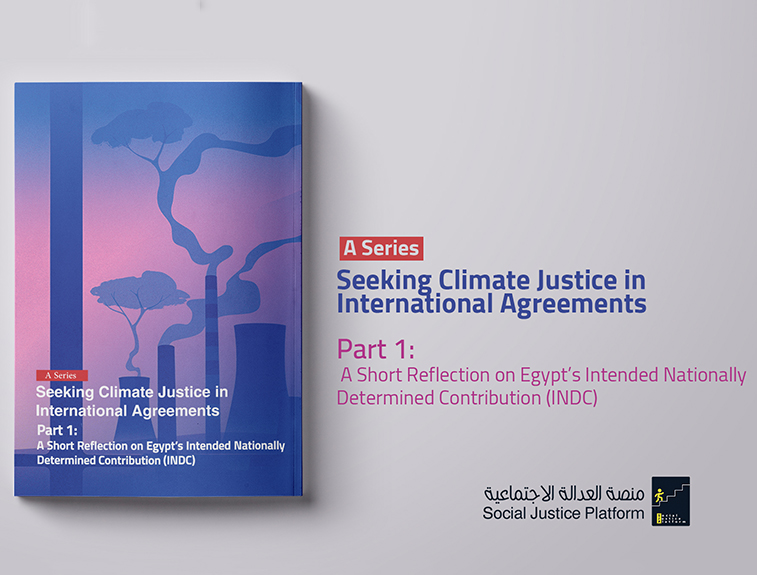 As the ramifications of global climate change rapidly increase, Egypt will become more and more vulnerable to climate and environmental disturbances. According to Egypt’s climate risk profile, the projected increase in temperature by the year 2050 is between 2°C to 3°C, which will simultaneously cause heavy rains, longer periods of drought, and long-lasting heat waves. The sea level rise in the Nile delta is expected to increase by 3cm to 61cm by the year 2085. And it is expected that sandstorms and dust storms will increase in both intensity and frequency. The changes in climate will decrease the Nile water availability for drinking, irrigation, and hydropower supply. And the changes in the flow of the Nile River will directly affect drought and flood occurrence. Given that Egypt’s population primarily relies on the Nile River for roughly 95% of its water needs, these pressures will cause unprecedented tensions and losses.

Climate change-induced losses will cause disproportionate harm to the most vulnerable groups in society. If we look at agriculture, for example, we will see that it accounts for 30% of employment in Egypt (excluding the large bulk of informal and unregistered agricultural workers). The overall increase in temperature will intensify water demand for crop production, not to mention the intrusion of saltwater on Egypt’s small arable lands (which make up only 2.8% of the Egypt’s entire land). There will be an increased loss of crop yields and subsequently in agricultural employment. The future of those 30%, as well as Egypt’s entire food security, looks bleak.

But this is just a simplified overview of some of the geophysical effects of climate change on Egypt. Climate change now forces us to confront how environmental degradation affects communities unequally, and how economic systems structurally exacerbate the problem. Official narratives often recount and stop at the environmental and economic impacts of climate change, without venturing to explain the geopolitical and historical factors that continue to reproduce more environmental injustice. The violence of climate change in Egypt manifests itself in the way social justice is not included in the government’s plan to adapt to climate change. Economic development plans that threaten ecosystems and people’s livelihoods continue to be celebrated. And experts still do not question the sustainability of Egypt’s capitalist economic goals.

The international system of climate governance, primarily headed by the United Nations Framework Convention on Climate Change (UNFCCC), is also not comprehensive enough to challenge national economic strategies that thrive on resource exploitation and accumulation. Egypt is a member of the UNFCCC and has signed both the Kyoto Protocol and the Paris Agreement, yet the extent to which international climate agreements help Egypt combat climate change remains highly questionable. So far, international agreements have failed to acknowledge that a low-carbon transformation can only happen if the imperatives of capitalist political economies are fundamentally challenged. Unquestioned industrial growth, both on the global and national level, will continue to contribute to carbon emissions and environmental degradation. For this reason, there is a lot of skepticism regarding the efficacy of international climate diplomacy, since climate justice continues to be compromised for the interest of securing wealth and profit.

Climate justice is about understanding that climate change is not an unfortunate natural phenomenon that can be dealt with by innovative scientific fixes. It is a concept that roots the climate crisis in the history of economic systems that only grow by systematically exploiting natural resources and dispossessing large communities (of both humans and non-humans) of their homes, lands, and ecosystems. If international climate governance still allows space for market-based solutions to climate change, ignoring the political and economic injustices that many governments (which incidentally happen to be Parties to the UNFCCC) are responsible for, it is unlikely that climate treaties will ever be of any help. What we need is a strategy for challenging the political and economic factors that contribute to global warming and climate injustice.

While Egypt is among the least-emitting countries in the world, its climate change management is by no means unimportant. As mentioned above, Egypt is one of the most vulnerable countries to the effects of climate change. These effects — some of which have already materialized — will weigh on people unequally. With regards to adaptation measures, Egypt has a huge responsibility to ensure that there is no social disparity in living under conditions of climate change. But to what extent is Egypt upholding this responsibility?

In this short series, we attempt to answer this question by looking at Egypt’s official promises and strategies to combat climate change through adaptation and mitigation measures. In the first essay, we analyze Egypt’s Intended Nationally Determined Contributions, a document that the government submitted in 2015, ahead of the Paris Agreement negotiations. In the second essay, we analyze Egypt’s proposed national efforts to protect biodiversity. And in the third and final essay, we address the social justice potentials of adaptation measures. The primary goal of the first two essays is to show how Egypt’s national plans might or might not enhance the principles of climate justice. In the final essay, we propose a theoretical approach to adaptation measures that situates them in a framework of transformative politics rather than defeatism and political compromise. Ultimately, climate justice can only be achieved by real changes on the ground, not the act of drafting more policies and gathering signatures.

Voices from the Field

Voices from the Field